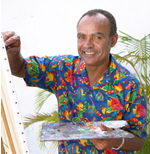 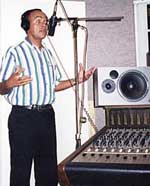 Bahamian artist Eddie Minnis was born in 1947 in Nassau, Bahamas.  He remembers drawing at primary school, and his mother always encouraging him to go outside to paint. He received his formal education from St. John’s College in Nassau where he participated in his first exhibitions during the school’s tea parties. He is an alumnus of Chelsea Pottery where he spent a lot of his time after school. In 1971 he received a BSc degree in Architecture from McGill University, Montreal, Canada.  However, since his first love had always been painting, he decided to pursue a career in art instead.

While in Montreal, Minnis became interested in editorial cartooning. On his return home he began the popular series “Pot Luck” with the Nassau Guardian newspaper. “Pot Luck” was featured daily in the Nassau Guardian and later in The Tribune (five years with each journal) building an archive of over 3,000 cartoons during a period of ten years.

Eddie is a self-taught artist. However, his style of painting was influenced by the French Impressionists. He has worked in a number of mediums including ink, watercolours and pastels, but he now specializes in oil painting with the palette knife. His interest in this method of painting began in 1965 and since then he has developed a unique technique. Eddie's paintings are strikingly three-dimensional in appearance and vibrate with the bright colour and light of The Bahamas. He is renowned for his landscapes and paintings of The Bahamas’ architectural heritage. When he paints, it is often with a sense of history and he talks of capturing moments that future generations can look back on. Minnis has painted many scenes of  Harbour Island where there is a wealth of historical buildings. He also paints seascapes and landscapes from around the Bahamas.

Another of his creative outlets is song writing, especially songs about island life. He has produced ten albums since 1971 including  Bahamian classics such as “Naughty Johnny” and “Shot-gun Wedding”. He has since consolidated his song catalogue on six CDs - “Greatest Hits 1, 2 & 3”, “Hey Mon”, “Discovery” and “Tropical Waves”.

Minnis held one-man art shows in 1969, 1972, 1976 and 1986 and has participated in numerous group shows both locally and abroad. Since 1989 he has held six exhibitions with his daughters, Nicole and Roshanne, and recently with son-in-law Ritchie Eyma. The highlight has been a special retrospective exhibition at the National Art Gallery of The Bahamas from July to November, 2014. His paintings are in private collections internationally including  the USA, Canada, Britain, Australia and Korea. Eddie was recently included in the video documentary entitled “Master Artists of The Bahamas” by Karen Arthur and Thomas Neuwirth. The exhibition inspired by the film was showcased in Waterloo, Iowa, Talahassee, Florida and the National Art Gallery of The Bahamas in Nassau, Bahamas.

Eddie encourages young talent wherever he finds it. He helped establish the FINCO Art Workshop in Nassau for young people, many of whom have gone on to become professional artists. A family man, his wife is the former Sherry Thompson. His three children Nicole, Roshanne and Ward are also artists.

Eddie's religious beliefs have deeply affected his appreciation of the beauty of creation which he portrays in his work. He is an elder in the local congregation of Jehovah's Witnesses in North Eleuthera, and devotes much of his time and energy to congregational responsibilities and evangelizing. He and his wife currently reside on Current Ridge, North Eleuthera.